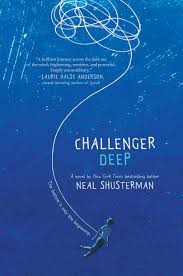 One of my favorite authors of all time is Neal Shusterman. I fell in love with his Unwind series, and have been influenced greatly by his writing style and story telling. However, his novel “Challenger Deep” moved me in ways I can barely describe. This was by far one of the best books I’ve read this year for so many different reasons.

First, I was instantly drawn to this book by it’s subject matter. As a person who deals with anxiety and has a strong interest in mental illness and psychology, I couldn’t wait to read this story, and I wasn’t disappointed. This is one of the most important books of the year in my opinion. It takes a subject that affects so many people on the planet and fashions it into a medium where we can all safely step into the shoes of someone who is dealing with these challenges. It sheds a light on a serious medical condition that most people shun or abhor.

Second, the writing is perfection. Neal Shusterman is a master at writing compelling stories with gripping and realistic characters. I was able to sink myself into the book with ease, much like Caden does with his thoughts. The book is divided into small segments, almost like diary entries, and are titled with compelling sentences that peak your curiosity. And then there are the shifts in pov. When Caden is at his worst, at his most dissociative with himself, at his darkest, the perspective shifts from first person to third person. You really feel like you are disconnected with reality as you read Caden talk about himself like he was watching a movie or a play. This was a brilliant way to demonstrate the dissociation that happens with schizophrenia.

Third, it’s all written from Caden’s perspective, and that makes you feel like you are along for the bumpy, twisted, and soul-wrenching ride with him. I actually had to put the book down and step away for a while because I was starting to feel his paranoia and anxiety – that is how potent the language, the images, and the emotions within his book are. You can easily relate to him, even if you don’t have schizophrenia (or any sort of mental illness, really.) He’s your average kid who is facing terrifying challenges, and that makes you sympathize with him and root for him throughout the entire book.

Fourth, pay attention while reading. Everything that is mentioned has a meaning and purpose. Even those small details you wouldn’t think would be important later, like the pearl necklace or the cocktail. I absolutely loved how everything in Caden’s delusions is reflected in the real world (that’s the importance of the items I mentioned.) One of my absolute favorite is the identity of the Captain. I won’t say who it is, but it’s great (and I must admit, I’m a bit ashamed at myself for not figuring it out sooner than I did.)

Everything in this story wraps up tightly. There are no loose ends. No errors. Everything is perfectly crafted to create a book that will leave you feeling satisfied, your soul deeply concerned for Caden’s well-being, and your mind open for all sorts of possibilities.

This book is a work of genius. I recommend it to everyone.