This weekend, Eddie and I had our bachelor and (2nd) bachelorette party. It’s our last hoorah before becoming husband and wife, and we made sure to spend it with important people in our lives.

If you recall, I had a bachelorette party with my friends and family last month where we went to Painting with a Twist, played games at my house, and opened up some adult gifts. However, I have a tradition with two of my closest friends (and Matron’s of Honor) where the three of us spend a day together. Brianna was the first to be spoiled, followed after by Nancy the next year. Now, another year later, it was my turn to have them treat me to a surprise day.

Instead of pole dancing lessons or a spa day, the girls decided to treat me to an evening in of movies, home made pizza, and suggestively shaped pancakes. We started off the evening opening up my gifts, which included some lingerie that Eddie had given his input on. He even showed up for a moment to give me gifts that he had purchased at Motor City Comic Con, including a signed autograph of Tom Welling from Lucifer (our favorite show – RIP), some Devilman Crybaby buttons, and a POP figure of Darkwing Duck, Kuzco, and Reptar.

After he left, us girls made some phallic pizzas with pepperoni and pineapple – a combination I love and never knew they enjoyed either. We had our pizza and watched out traditional bachelorette movie – Magic Mike XXL. However, we had to pause to walk down to the local ice cream shop to get some dole whip. By that time, it was late and we went to bed, but we were sure to celebrate in the morning with some sprinkle pancakes.

In the meantime, Eddie was spending time with his groomsmen. The boys went out to a game-themed escape room and were able to escape with just a few minutes. Eddie told me that they wouldn’t have made it out in time if they hadn’t earned bonus time by solving puzzles in the lobby. He didn’t tell me much of the details, but from what it sounds like, they had a great time! 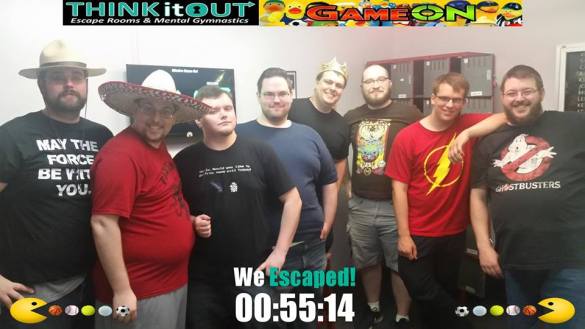 Afterwards, they decided to go see Deadpool 2, then went back to the house to drink and hang out. The amount of alcohol we had in the fridge when I got home was astronomical, especially for someone who doesn’t drink. However, they were responsible and didn’t drink nearly enough to make a dent in what they brought.

Overall, it was a great way to celebrate the last few days of being “single” (at least on legal documents). Soon enough, we’ll become Mr. and Mrs. Bunch and I can’t wait!